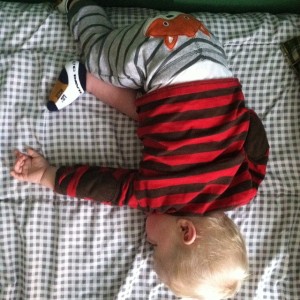 It’s become glaringly obvious to me that I’m incapable of making any creative choices on the weekends. I’m going to have to be a Working Week writer for the time-being or nothing. How do mom’s do it? It’s cliché to say but there really aren’t enough hours in the day and I’m not willing to give up what little sleep I get. On that note, I hear the siren song of a deeply sleeping baby reminding me how much I enjoy a good sleep. Fingers crossed.

So here you go:

Alphamom.com and amalah.com are blogs. “Amalah” posts to both and she’s awesome and hilarious. Lots of useful opinions and advice worth trying.

I signed up with babycenter.com and they send you weekly updates on the baby through your pregnancy into childhood.

I can’t stand the “what to expect” books. I think they made me feel bad about myself totally unnecessarily. Unfortunately I haven’t found anything to replace them. I’ve been on the verge of buying Dr. Sears’ books for awhile but I fear they’re preachy and so I put it off.

Baby shirts that snap closed on both sides: my mother and MIL (get used to a lot of annoying acronyms) both recommended these old school t-shirts but, in my experience, they just get bunched up under baby arms. Blech. Onesies are my preferred solution.

Babies “sizes” based on age are totally meaningless. Sizes based on weight are less meaningless but unfortunately they’re generally one or the other. You’re just going to have to try one thing on the baby and then measure it against the other stuff you have to see if they’re bigger or smaller. Carter’s are pretty consistent with their sizes though so if baby wears a 6 month onesie you know that she can wear any of their 6 month onesies.

Baby soy products last forever. They also don’t seem to shrink. They don’t pill and they’re really soft. We got Henry one of their hoodies and it’s awesome. I also got a bunch of their other things in infant sizes and unfortunately have to give them away unused because he was such . Bummer.

With above in mind, I’d recommend not bothering with clothes in the “infant” size unless you know (KNOW) that your baby will be tiny. H couldn’t wear any infant stuff except the onesies which are very forgiving.

Aden & Anaiis swaddle sheets are AWESOME and good for many more things than just swaddling. If you’re breastfeeding they will, inevitably, get soaked all the time. You will want to clean them all the time but baby will love the smell. Maybe just ratchet back your need for cleanliness just a little bit.

Breast milk isn’t like other foods – it’s basically the elixir of life. For example, babies scratch themselves all the time and breast milk helps heal the cuts fast, x-men style. If I had a bunch of time and extra milk I’d experiment with it; I think it’d clear up my pimples if I tried it.

Baby nails are HARD to cut. Practice and don’t be in a hurry – there is no shame in keeping the kid in mittens. I sit H on my lap facing the tv and let ESPN hypnotize him. I’m not proud of it but I need both hands free to do it. Everyone else says to cut them while baby is sleeping but, dude, you are either going to be SLEEPING while baby’s sleeping, too tired to not cut baby (which I’ve done twice), or baby will be swaddled and you won’t be able to get at baby’s hands.

When you’re ready to try feeding from a bottle, just buy one. It probably won’t work out but you will have been able to collect enough info to make a more informed decision the next time.

I use the Dr. Brown’s regular bottles. They have this blue insert thing that allegedly reduces air intake when baby sucks. This is important if baby has reflux. Reflux is very common so, in my mind, it can’t hurt to assume that baby will have it. If baby doesn’t it can still help.

I don’t know what you plan to do for a sleeping arrangement but no matter what it will probably be useful to have a bunch of different options. Here are some of the nuances:

a crib: a good goal but probably not immediately practical. I used Henry’s for sorting laundry until, oh, like a week ago.

a swing: look for a seat that is breathable in case of a baby that sweats a lot like H. Also padding will eventually flatten so look for something that doesn’t require padding to be soft; think mildly structured hammock.

a bouncy chair: won’t be super useful while baby is really little because she won’t have enough weight to lay it down and not enough muscles to sit up. Good to have for a place to put baby while you’re showering.

a co-sleeper: I wish I registered for something like this. I just didn’t understand the differences between the options and didn’t think we’d use it. Having options is better than being conservative.

a pack-n-play/ playard: we use it like a play pen of olde. Ours was a hand me down and is missing some stuff but, if yours is new, it will have all the stuff you need to use it as a bassinet or something like a co-sleeper thing. Using one of these has the added advantage that, if you travel, baby can still sleep in the same place; consistency makes things much easier on the baby.

a bassinet: mobile bed for little babies. Like a co-sleeper without the cut out side thing. Super ugly but that’s difficult to avoid. If you’re going this route I’d just get a pack-n-play or playard.

a cradle: we inherited one. Not super useful; the main draw is that it rocks but I found a swing to work better – baby doesn’t roll in a swing. 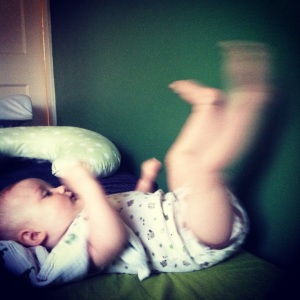 When I was registering for my baby shower, I scoffed at the baby leggings – “dumb hippies and their dumb baby leggings”. Now I love the few pairs of legging type pants I have for GH because babies constantly have their legs bent up in the air and leggings don’t bunch up near his crotch, successfully keeping him warm.

Lesson learned: the kind of things that look hideous on adults are ideal for babies and luckily they can pull ’em off! 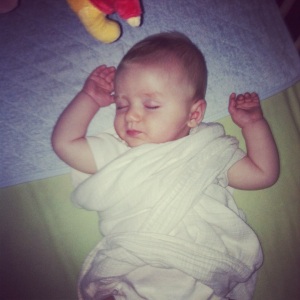 Naps are the most important thing in the universe. Ever. Without naps, my little angel loses all control of the muscles in his legs and flops, in a sad heap, to the floor. His eyes bulge, he smiles like a cartoon lunatic and his exhausted neck swings his head around like an adorable medieval weapon. And that’s phase 1. Phase 2 involves whining, crying, sobbing and more whining. Phase 3 is, after you finally get the baby to sleep, he pops up, disoriented, every 30 minutes and starts to cry. Both pathetic and ridiculous.
Lesson learned: Preemptively nip it in the bud if anyone tries to screw with baby’s nap schedule: there is no argument against baby naps that bears any weight at all.

It’s been SO long since I’ve posted anything longer than 140 characters. But worry not – I haven’t been totally idle. I had a baby! We’ve been fixing up our house! And… that’s it! That’s not enough? It for serious feels like enough.

Seriously some heinous things have been perpetrated on my house and the part of me that is overwhelmed by all the stuff we need to do is still losing out to the part of me that needs JUSTICE. I mean come ON! There’s WOOD under this stuff! Who DOES this? Oh right – people who were just like my grandparents would be if they didn’t have their children keeping them in line…